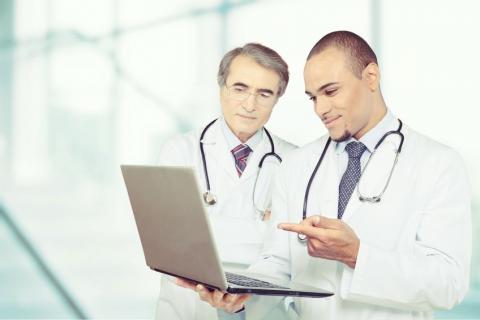 With regard to the requirement of mandatory electronic prescription, the process of modernization of the entire system started as early as in 2015, reflecting its incorporation into eHealth – the National Electronic Healthcare Strategy and the eGovernment Development Strategic Framework 2014+. The implementation of the ePrescription project followed its valid schedule and the project was completed in December 2017. The ePrescription system was included in the critical infrastructure of the state, and hence has been subject to the tightest security measures as referred to under the Act on Cybersecurity and related legal regulations.
Since 1 January 2018, the system has been operated in the mode of mandatory electronic prescription and has been running smoothly. Health insurance companies routinely download batches of ePrescriptions of their insureds, which gives them a complete overview of expenses. Since the start of the mandatory electronic prescription, applications for the doctor, patient, and pharmacist have been also made available. In their application, doctors can prescribe an ePrescription outside their office. The patient application allows patients to display a list of all of the ePrescriptions issued for them, in respect of which citizen identification in the Registry of Inhabitants (“ROB”) was performed. In their web application, the patients may also decline the possibility of healthcare professionals viewing the patient’s medication list. The application for pharmacists allows pharmacists to obtain information about the medicines prescribed on the ePrescription in case standard communication with  the ePrescription system fails.
The ePrescription system has already brought many a benefit, particularly for the patient. Although the patient still has the option to obtain the identifier in the form of a printout accompanying document, which is the most frequently used option, electronic delivery of the ePrescription identifier – particularly by means of an SMS or e-mail message – keeps gaining popularity. In 2018, 3 million such SMS messages and 492 thousand e-mail messages were delivered in total; in 2019, it was more than 10.5 million SMS messages and 702.5 thousand e-mail messages; in 2020, these numbers further increased to nearly 28.5 million SMS messages and 840 thousand e-mail messages. In 2021, there were already over 31 million SMS and 687 thousand email messages.

In 2018, 58.5 million electronic prescriptions in total were issued and the total amount of reimbursements for dispensed reimbursed medicinal products prescribed via the ePrescription system was more than 26,118,000 thousand CZK.

Almost 50 thousand doctors and dentists have access data generated by SÚKL, which is an absolute majority. Both in 2019 and in 2020, verification of applications was routinely conducted in all professional chambers. Prescribed medicinal products may be dispensed in practically all pharmacies in the Czech Republic. As of 31 December 2020, 45,763 doctors, 18,247 healthcare facilities, and 2,875 pharmacies were actively involved. These numbers suggest a stable and routine usage of the ePrescription system by the absolute majority of healthcare service providers and healthcare professionals.

System support is provided on an ongoing basis and the system is being continuously upgraded and modernised, taking into account suggestions received both from professionals and from the general public. One of the major changes implemented in 2019 was the change of the medium used for the primary identifier where the bar code was replaced with a QR code. This change had been planned in the long term in order to improve the quality of identifier scanning in pharmacies (QR codes are more tamper resistant).

Furthermore, in mid-2019, SÚKL rolled out a back-up system (third data centre). The purpose of the back-up system is to support a smooth dispensing of electronic prescriptions within the territory of the Czech Republic in case of a sudden outage of the primary ePrescription system that provides for this service. The back-up section of the ePrescription information system is totally independent of the primary one and it is operated in a completely separate location.

On 1 January 2020, the Ministry of Labour and Social Affairs and the Czech Social Security Administration (ČSSZ) rolled out an electronic sick note system. For authentication in the B2B channel, the same certificate is used as the one used by the healthcare service provider (healthcare facility) for SSL communication with the ePrescription system. In October 2019, electronic sick note testing commenced, and SÚKL provided maximum cooperation in the implementation of the ČSSZ project. This is an important step for healthcare professionals, as they may avail of their existing authentication tools in another system that has been implemented nationwide by public administration.

The most awaited one was the change allowing to share the patient´s medication list, which is, in essence, a list of all electronic prescriptions issued or dispensed for an unequivocally identified patient. Medication list may be displayed only for those patients whose identity has been unequivocally established against ROB in the process of prescribing the medicinal product. Following a thorough consideration of the situation in the Czech Republic and with a view to the actual benefits and practical aspects of the patient´s medication list so called opt-out system was selected. This means that unless the patient expresses his/her disagreement with the viewing, the doctor, pharmacist or clinical pharmacist may view the patient´s medication list The logging of all declined or granted consents is safeguarded by the ePrescription consent administration that was put into live operation on 1 December 2019. At any time, the patient has the right to express their general disagreement with doctors or pharmacists viewing his/her medication record. Equally, the patient may grant an express consent for a selected specific doctor or pharmacist.

Patients can express their dis/agreements via the patient web application, patient’s data mailbox or a letter signed with an officially authenticated signature.

The same rules as those for adult patients apply also to minors.

The viewing of the patient´s medication list proper has been possible since June 2020. Along with the roll-out of the shared medication list, it is also possible to avail of a check of duplicities in medicinal product prescribing.

Another adjustment to the ePrescription system was done with regard to the newly established reimbursement of medical cannabis from the public health insurance system. As of 1 January 2020, the ePrescription system has been providing support in the recording of the amounts of dispensed medical cannabis in the amount of 30 g with a 90% reimbursement from the public health insurance system. This change was associated with a complete change of the prescription codes for cannabis, recording of both maximum dispensing limits (the existing maximum for dispensing of 180 g per month and the new maximum amount of cannabis with 90% reimbursement of the price from the health insurance system), as well as a change of services for pharmacists who, when dispensing cannabis, must distinguish whether they dispense reimbursed or non-reimbursed cannabis.

A substantial change implied by effective and valid legislation is the obligation to digitize paper prescriptions in the pharmacy. This is a completely new functionality and, for the purposes of digitized prescription record-keeping (electronic dispensing records), it was necessary to prepare new services for pharmacists and health insurance companies who obtain information about digitized prescriptions for the purposes of establishing reimbursement of these activities for the pharmacies.

The legislation also implied minor changes that had to be reflected in the system by 1 January 2020. Such changes include, for instance, cancellation of two-item prescriptions for paper prescriptions as of 1 June 2020 (checks during digitalization), unification of prescription validity to 14 days, and adding a patient contact on the ePrescription at the time of illness (telephone or address of residence). Furthermore, web and mobile applications were amended to meet the currently effective legislative requirements.

Since 1 April 2020, Czech citizens also may request an excerpt of electronic prescriptions issued and dispensed for them within a selected period of time from the ePrescription information system at a public administration contact point (Czech POINT). Thanks to this functionality, the patient may have his/her electronic prescriptions printed out at the Czech POINT branch; the scope of the data provided is defined by governing legislation.
As of 1 June 2020, the patient also has a new option to hand over a list of all of his/her ePrescription identifiers in the pharmacy by means of submitting a machine-readable identification document – primarily the citizen´s ID card. On the basis of the submitted patient´s ID card, the pharmacist may obtain a list of all ePrescriptions that should be dispensed to the patient in question. The dispensing of the medicinal products proper is then carried out as usual, on the basis of the obtained ePrescription identifiers.
The electronic prescription has proven much useful particularly at the time of the COVID-19 epidemics in the Czech Republic. In this difficult period, the electronic prescription supported the required social distancing in a highly effective manner, significantly reducing the necessity for patients to visit their doctors in the offices, remarkably contributing to the protection of the health of all Czech citizens.

Based on the amendment to Act No. 167/1998 Coll., on Addictive Substances and Amendments to Some Other Acts, so-called ePrescriptions with a blue stripe were introduced. The effective date was set for 1 January 2022. This involves the issuance of prescriptions for medicinal products containing highly addictive substances listed in Annex No. 1 or 5 of the Government Regulation on the List of Addictive Substances. Record keeping of electronic recipes with a blue stripe is mandatory.

Based on the amendment to Act No. 167/1998 Coll., on Addictive Substances and its impact on Act No. 378/2007 Coll., on Pharmaceuticals, which came into effect on 8 October 2021, the central repository of vaccination records becomes part of the eRecept system. Registration of vaccination records in the eRecept system is mandatory. The recording of vaccinations carried out concerns all types of vaccination, i.e. regular, special, extraordinary, voluntary, reimbursed and non-reimbursed. Since December 2021, the patient has the right to express disagreement with the viewing of vaccination data similarly to the patient’s medication list, and since 1 January 2022, electronic records of vaccination have been successfully deployed in production operation, for which the The Ministry of Health has set an exception for the so-called no penalty period for a period of 6 months from the date of introduction of this new service. Information about the applied vaccination of the patient is available in the patient's medication list. The medication list will thus allow patients, doctors and pharmacists to view the data on the vaccination carried out.

At the same time, SUKL has long been involved in the project "Deployment of Cross Border Services in the Czech Republic - NIX-ZD.CZ II. (ePrescription/eDispensation)", the primary objective of which is to extend electronic dispensation beyond the borders of the Czech Republic to other EU countries. The recognition of prescriptions issued in another EU Member State is already introduced by Directive 2011/24/EU on the application of patients' rights in cross-border healthcare. At present, therefore, there is an electronization of health care (eHealth) in the EU Member States, including in the field of electronic prescribing. The NIX-ZD.CZ II project focuses on the cross-border exchange of ePrescriptions and information on dispensed medicines, as a result of which the safety and quality of health care provided and patient comfort will be increased. Currently, the expected date of the Czech Republic's involvement among other countries participating in cross-border data exchange is the beginning of 2023.